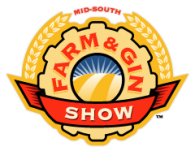 A few weeks ago Ray suggested that I attend the 64th annual Mid-South Farm & Gin show down in Memphis this year.  We’re adding about 1,600 acres of cotton to our crop plan this year and he thought it would be a good way for me to learn more about cotton and hopefully pick up some intel on what the experts are predicting for cottons future.

So I made my reservation and got ready to attend the show, but I had no idea how big of a deal this show was.  Let me tell you- in the world of cotton the Southern Cotton Ginners Association (SCGA) know how to plan a show, because this thing was HUGE! There were over 400 exhibitors from literally all over the world and they reported over 17,000 people attended.  All the big dogs were there too.  Every time I turned around it seemed I was bumping into a State Farm Bureau president or Ag Commissioner or Secretary of Agriculture from either Arkansas, Mississippi, or Tennessee, plus the big boys from the National Cotton Council were on hand including Chairman Shane Stephens and VP Craig Brown.

I took my time and enjoyed looking at all the different booths and entered to win several Yeti coolers, (I still haven’t gotten my winning call yet) but the focus of my trip was to hear the wily Richard Brock give the Ag update at 8:30 am Saturday morning.  As you know at Rowland Farm Investments we buy and sell production row crop farms.  Ray brought me on in 2014 to help him with marketing and sales, but not the kind of marketing Mr. Bock does.

Now I’m not totally new to agriculture, but I’m no expert either.  I grew up in Mississippi County, Missouri and drove a highboy spraying weeds and putting down nitrogen back in the 1980’s.  Then I joined the Marine Corps, sold real estate, got into politics and now back into selling row crop farms with Ray.  Boy, farming has changed a lot since then and the more I have helped Ray the more I have learned that the price of land is all dependent on the rent a farmer will pay and that is determined by the amount of bushels a farmer can produce and what people will pay per a bushel.  Needless to say since 2014 I have been seeing that what folks will pay for a bushel has a HUGE impact on what we can sell an acre of row crop land for.  Also, since 2014 the prices for corn, beans, rice, wheat and cotton have not been particularly good. 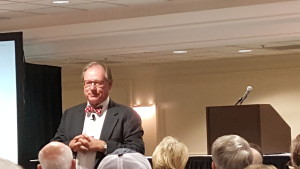 I was excited to hear what Mr. Brock had to say.  I had been reading his monthly articles in the Delta Farm Press and decided I liked the way he thinks.  As a Marine I was taught to look at all the possible scenarios and prepare for the worst.  When doing that it’s good to ask yourself, “What is the risk to me and my men if I am wrong.” Mr. Brock seems to think exactly that way and as I read his articles I would cut out his charts on the 7 stages of the Agricultural Economic Cycle, Cotton Cycles, Corn Cycles and hang them up on my whiteboards in the office.  I wanted so badly to subscribe to his weekly Brock Report, but Ray thought it was just too expensive.  When I would meet with farmers or go to the local bean or corn meetings I was amazed at the things farmers said about future prices and what they were basing it on.  I never said much because I don’t consider myself an expert, but clearly these boys were basing all their comments on blind hope and the expectation that a drought, flood, hurricane or swarm locusts would wipe out their neighbors crops and leave theirs unharmed.

I’m not an economist but being in politics and business over the last 20 years and has taught me a few basic economic principles that seem to hold true.  The one that I think applies to the current farm economy is, “What goes up, always comes down.”  Commodity prices, rent rates and land values had all risen dramatically for most crops since 2010.  When I joined Ray in 2014 things were at a feverish pitch.  Land was selling at unheard of prices and even local farmers were bidding up property at auctions so they could increase their acreage and make more money.  We had farmers killing themselves to rent land at $200, $250 and sometimes even $300 an acre. It didn’t take a rocket scientist to see that those prices would not and could not continue to increase.  I asked tons of questions to lots of Ag “experts” trying to get a grasp on exactly what was happening.  The more I learned the more I worried.   Now the one guy I felt was looking at things realistically and offering sound advice was this Brock guy who wrote a monthly article in the Delta Free Press, but when I brought his name up, or the info he had in his articles to the dreamers, umm I mean farmers I was talking to…they would look at me with disgust, kick the ground and say, “He is just a pessimist who never says anything positive.”

It kind of reminded me of that bible story in 2 Chronicles 18 about King Ahab and King Jehoshapht. When King Ahab asked Jehoshapht to join him in invading Ramoth-gilead. Ahab said that all his prophets had predicted victory, but Jehoshapht asked if there was another prophet of the Lord they could inquire of. Ahab told him there was one other prophet they could ask but he didn’t like him, because he never prophesied anything good for the king.  Turns out the prophet Micaiah was right and King Ahab ended up dying in the battle.  Many of today’s farmers seem a lot like King Ahab, and just like the old king, there are grave consequences to ignoring the warnings of a modern day “prophet” who uses historical facts and common sense to predict the future.

Mr. Brock didn’t disappoint me as a presenter.  He was funny, informative, fast paced and most importantly…factual.  He was able to provide a macro view of the Ag world, while helping me understand how that impacted the micro world I’m working in. I will try and give just a quick overview of the highpoints from my notes. 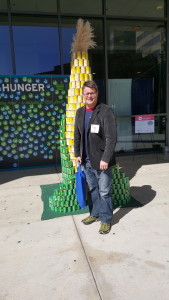 Rodney Jetton standing in front of the fighting hunger display

First, he covered four events he called ‘Game Changers.’  $2 cotton in 2011, $8 corn in 2012, the recent oil price collapse and the looming sale of Syngenta to China and explained how all these have led us to the situation we are currently in.  I won’t repeat all the reasoning he used for that, but he also said these events are causing our current downturn, and would continue to have a negative effect on prices for years to come.

He predicted that we are towards a bottom in most crop markets and would probably stay there for a while, but he thought overall farm income would improve in 2016 for efficient farmers, because input costs would be dramatically lower in 2016 than they were in 2015.  He pointed out something that I have been seeing in my area.  Farmers who are in a bind because of taxes.  Farmers with big past tax bills, but no new equipment to depreciate and a much lower farm income.

Brock seemed to believe that beans, corn, milo, wheat and rice would track along where they are now with some chance of going slightly lower, but probably not gaining any significant rebound anytime soon.  I don’t think it was the kind of news most attendees wanted to hear, as I picked up several moans and groans from those I was sitting by, but these just the kind of facts and information I was interested in.  He did think cotton was heading towards the end of its downturn and could see a big increase sometime in the next two to five years.

I signed up for the Brock Report free trial and I’m going to try and talk Ray into buying a full subscription so we can stay on top of the current situation, but I feel good about where we are.  We started taking steps in 2014 to prepare for a downturn.  We sold some of our farms and switched many of our crop leases to reasonable cash leases.  We also worked to pay down debt and preserve cash.  I feel we are well positioned to weather the coming rough years and will be in a position to take advantage of opportunities that any economic downturn provide.  But we can still do a better job of preparing our annual crop plan and marketing our crops.  During this downturn fate will reward those who diligently manage every aspect of the operation and become more efficient.

All in all I enjoyed the Farm & Gin show.  The organizers has things laid out nicely and the schedule flowed smoothly.  Memphis is a great town to visit and I even got to hear some live blues at my restaurant Friday night.  I hope I get the opportunity to attend again next year.  Wishing everyone a successful 2016 crop, Rodney Jetton.